The latest bike build out of Woolies Workshop at the Emporium in Venice:
¬†Woolie twisted steel into flying art has and has gotten his hands deep into the latest Deus build and created one for the books. ¬†Taking the heart and power of a modern Yamaha and giving it the dangerous appeal of those eye-catching vintage bikes while retaining proper geometry and function. ¬†The unveiling of this pretty beast to everyone in attendance at the California Swank Rally caused quite a commotion. ¬†All eyes were fixed on it and hands wanted to twist its throttle. ¬†Only one lucky son of a gun was allowed to get near the gem, and that was our very own moto test pilot Micah Davis. ¬†They worked perfectly together as he was taking it for a few laps and spins in the desert at breakneck speed. ¬† When asked for a quote about the bike, Micah said "Shit. ¬†She's fast. ¬†I don't want to give her back."
When Woolie was asked for a quote on the build, he was a little more descriptive.
"The guys from Yamaha became one of the main sponsors for our Swank Rally and wanted me to build a custom bike as part of the program. So we went back and forth a bit talking about what direction to go with the project, we decided to start with a 2019 YZ450FX and build a bike that could be raced at the rally. I knew this was going to be difficult as the plan was to deconstruct the motorcycle and make it look as much like a vintage version as possible while also keeping at least a small part of the bike modern. I stripped the bike, and you may or may not know, but the Yamaha's cylinder head is revered, the intake is at the front of the motorcycle and exhaust is at the back, and The gas tank is under the seat.
I grabbed an old Yamaha motocross gas tank that we had laying around and used it as a buck to make the patters for the basic shape of the tank.
Know came to the crux of this build as this little gas tank fit inside of the delta box frame, so I tried all sorts of things to make it work until I cut the pattern and pushed it over the frame rail, and this worked. In the end, the front third of the gas thank I made is airbox, and I made a complex tank that went under the seat like the standard bike. I had to ditch the stock airbox and create a new intake runner. I made a tapered and curved Titanium runner to an excellent big K&N air filter with a pre-filter, and I also ran the crankcase breather under the per filter.
The sub Frame was made out of .60 Chrome molly tubing and the rear fender was made of a heavy gauge aluminum. I paid attention to reproduce all the standard equipment like the drive chain roller guides, and so on. I wanted the bike to look cool but to be a proper working dirt bike.
I was able to make the bike very narrow and as much to scale to the standard old school gas tank. I also spent a fair bit of time making an old school front fender mount out of a heavy gauge 660 aluminum. This took quite a few hours on the air hammer. The goal was to mount the light gauge front fender in a way that it could move and not break right away.
The guys at Scott's performance made the parts to fit one of the dampers, as I feel that is just a standard safety feature, I also installed the new Rekulse clutch then drained the oil after breaking in the clutch and filled it up with Motul 300V.
My brother at Hammerhead designs sent me all the parts they had in stock for the bike like his titanium Rapture pegs and shifter plus a billet break peddle. We fitted a new set of Bridgestone X30's for intermediate Teran as I did not know what they were going to ride on. The paintwork and graphics were as always a collaboration with my painter Matt at Anaheim custom's, and we spent a lot of time mixing the colors, the white has a touch of blue and yellow in it to make a 1970's color. Now that the bike was on the ground, it was out of scale as it was too tall. The vintage motorcycle's where small, so we lowered the bike three inches and re-valved and resprung it for a 175lb person kind of right in the middle not knowing the rider. I then took it all apart and had it powder coated black, and I also had the radiators anodized black the make them disappear visually as much as possible. We stuck with the stock number plate as the new part in the design. last but not least, the guys at Saddlemen's took the bike into there custom seat department, and we designed a seat that should be familiar to a vintage MX bike."
Images by Monti Smith, Harry Mark and Niki Cram 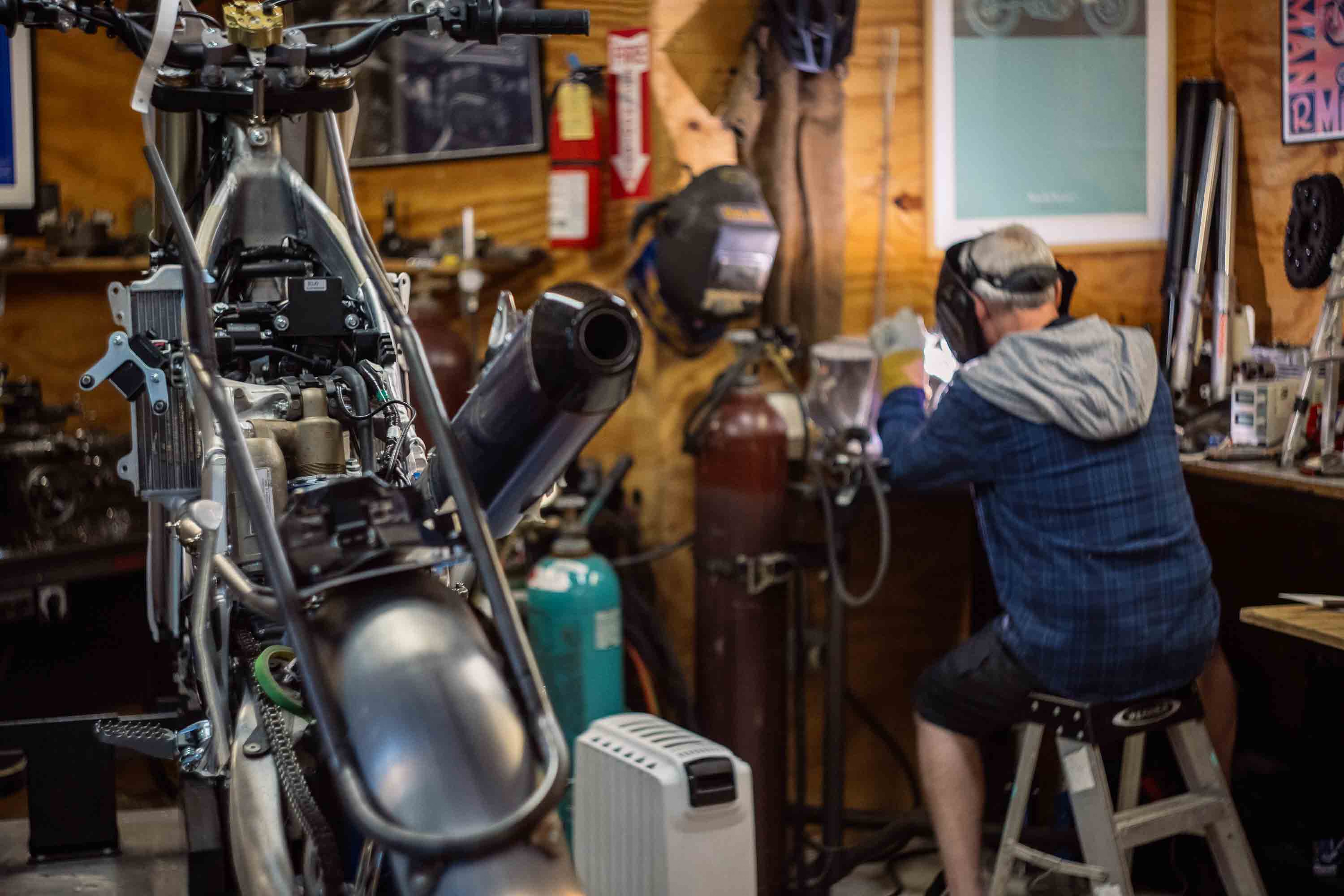 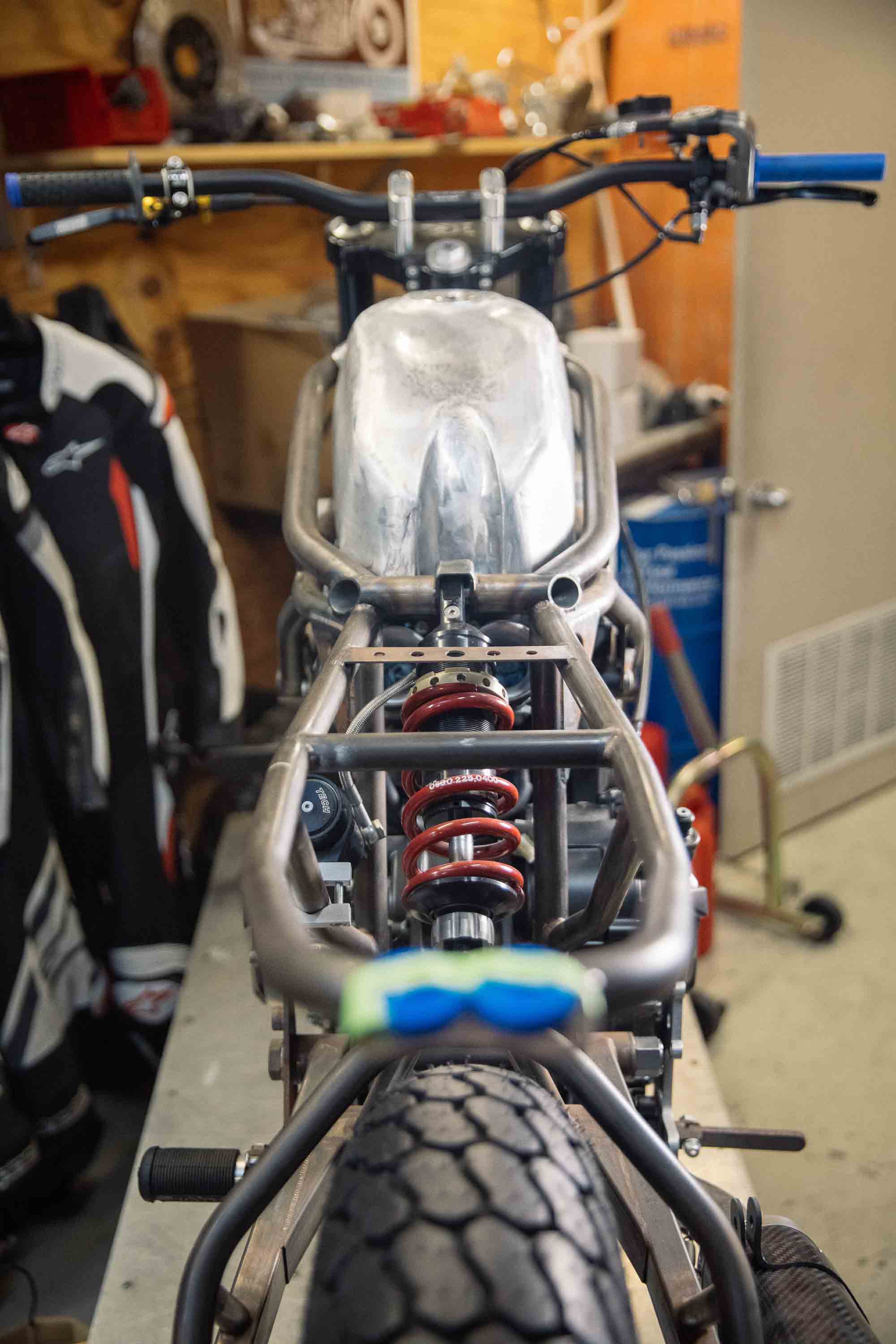 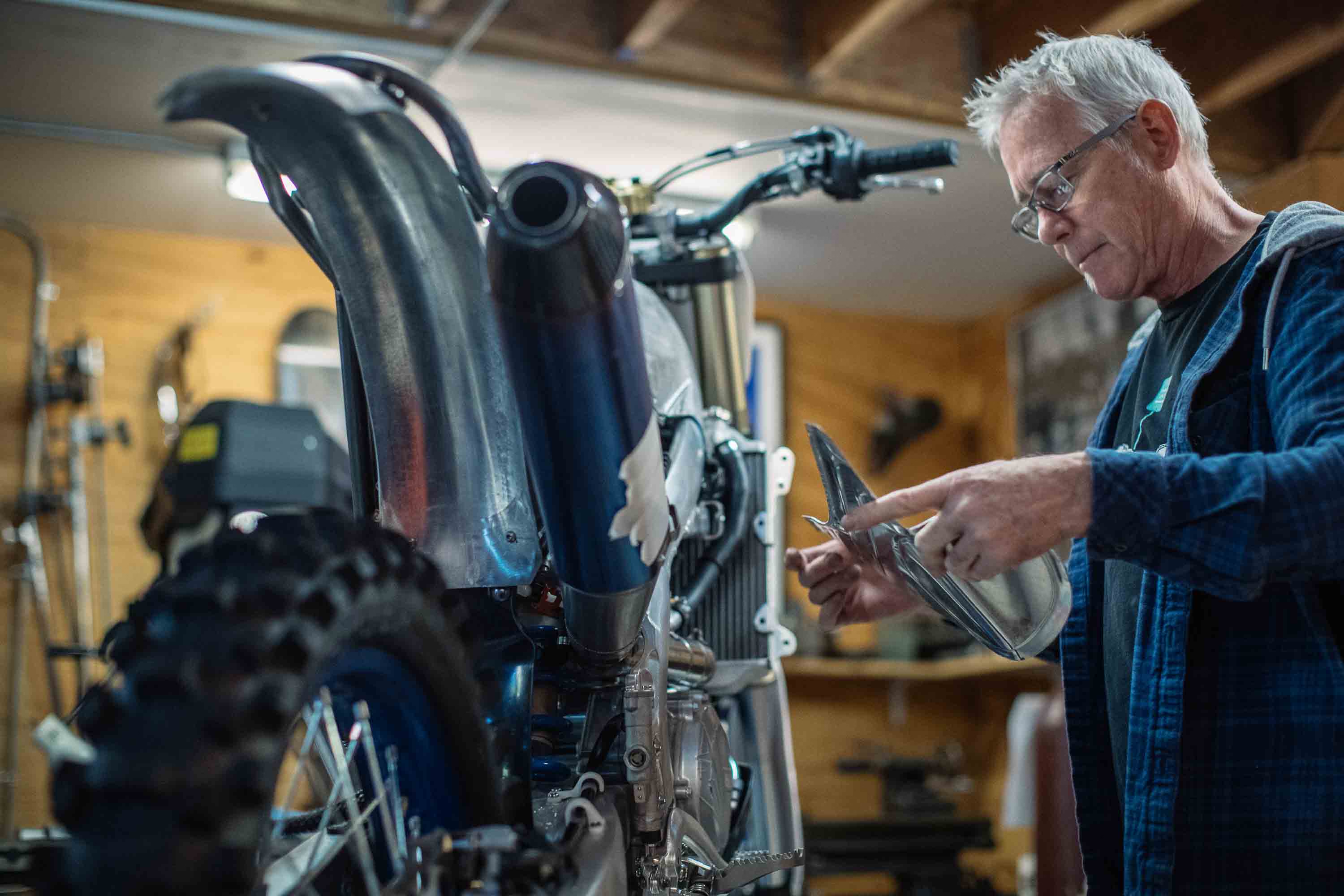 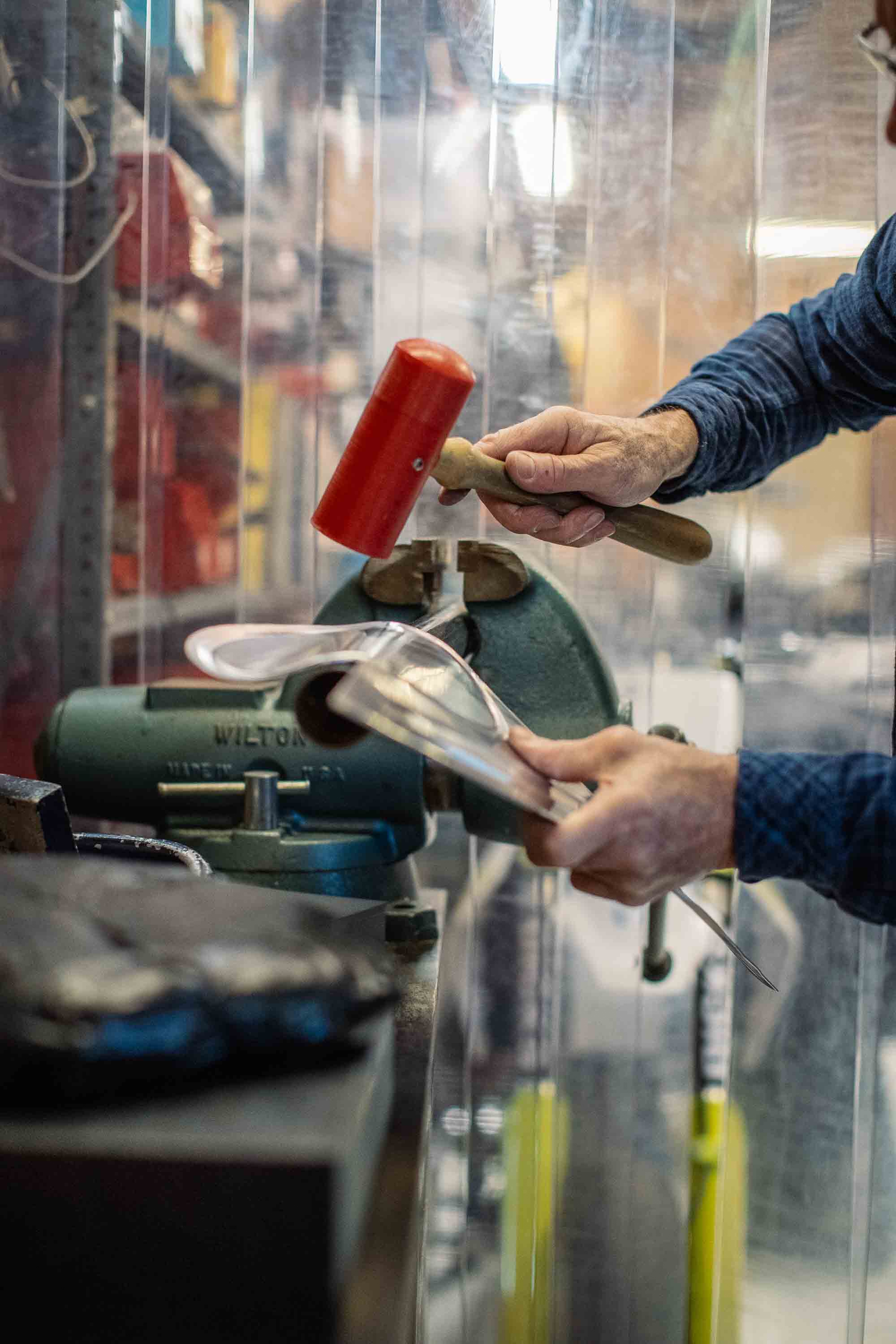 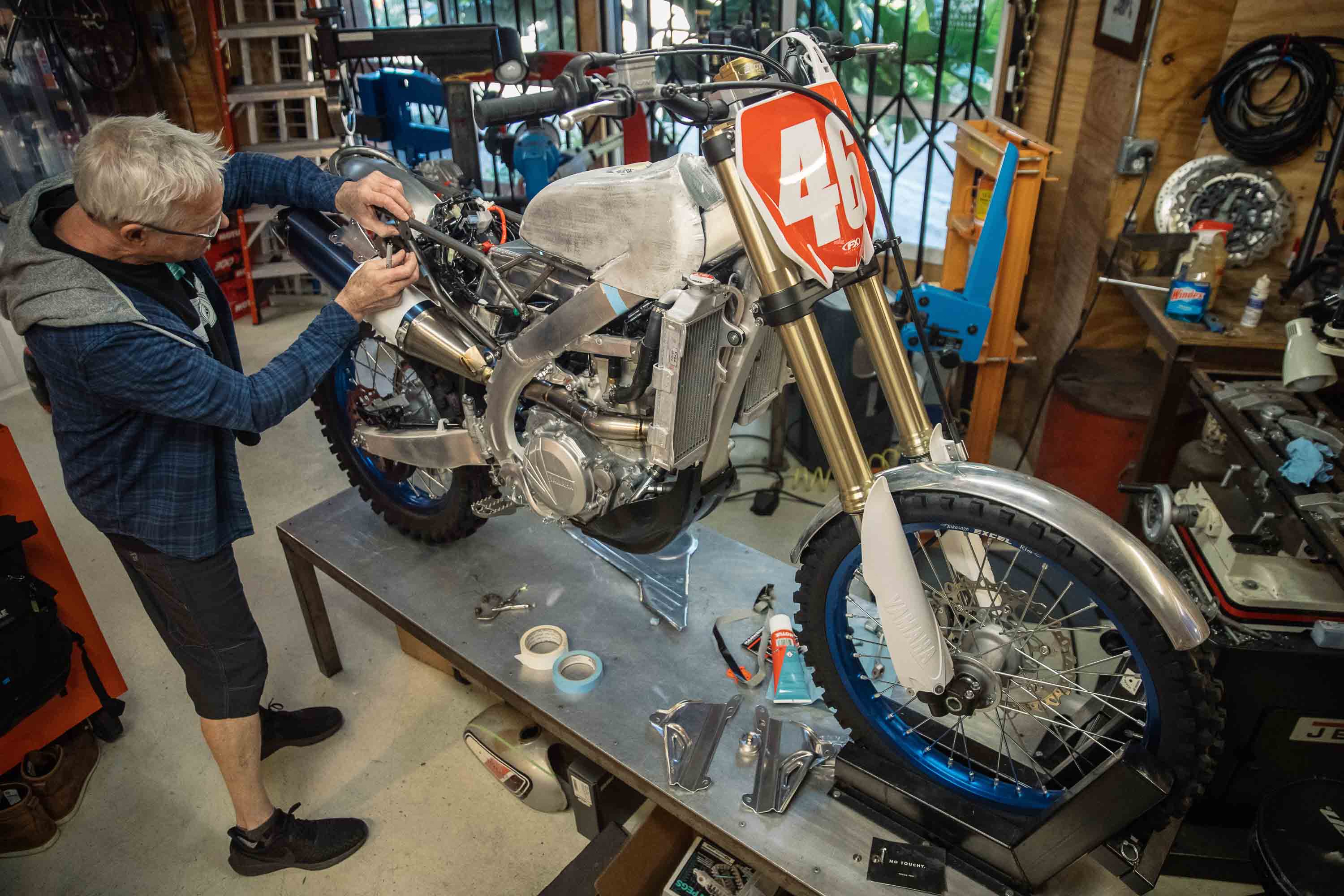 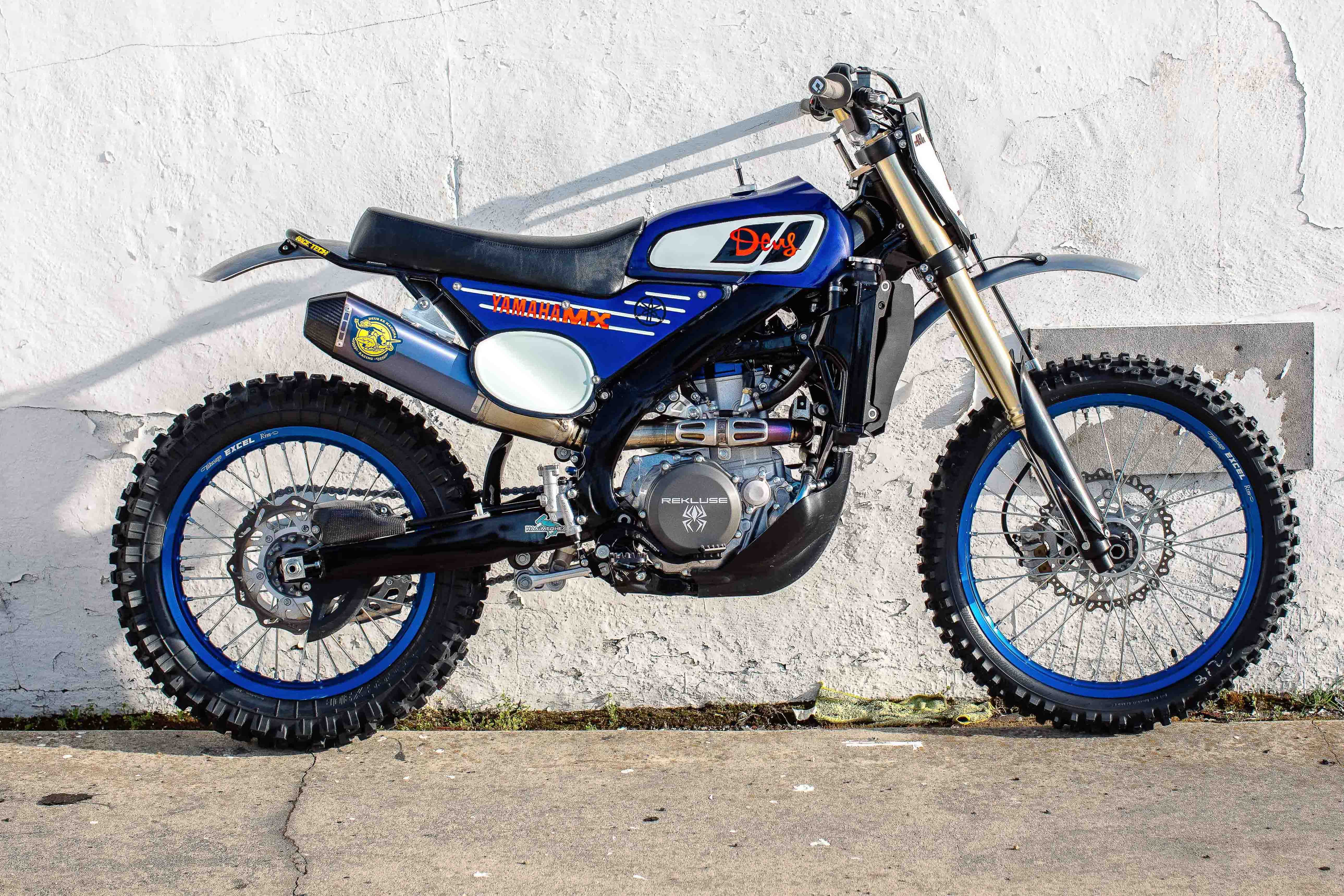 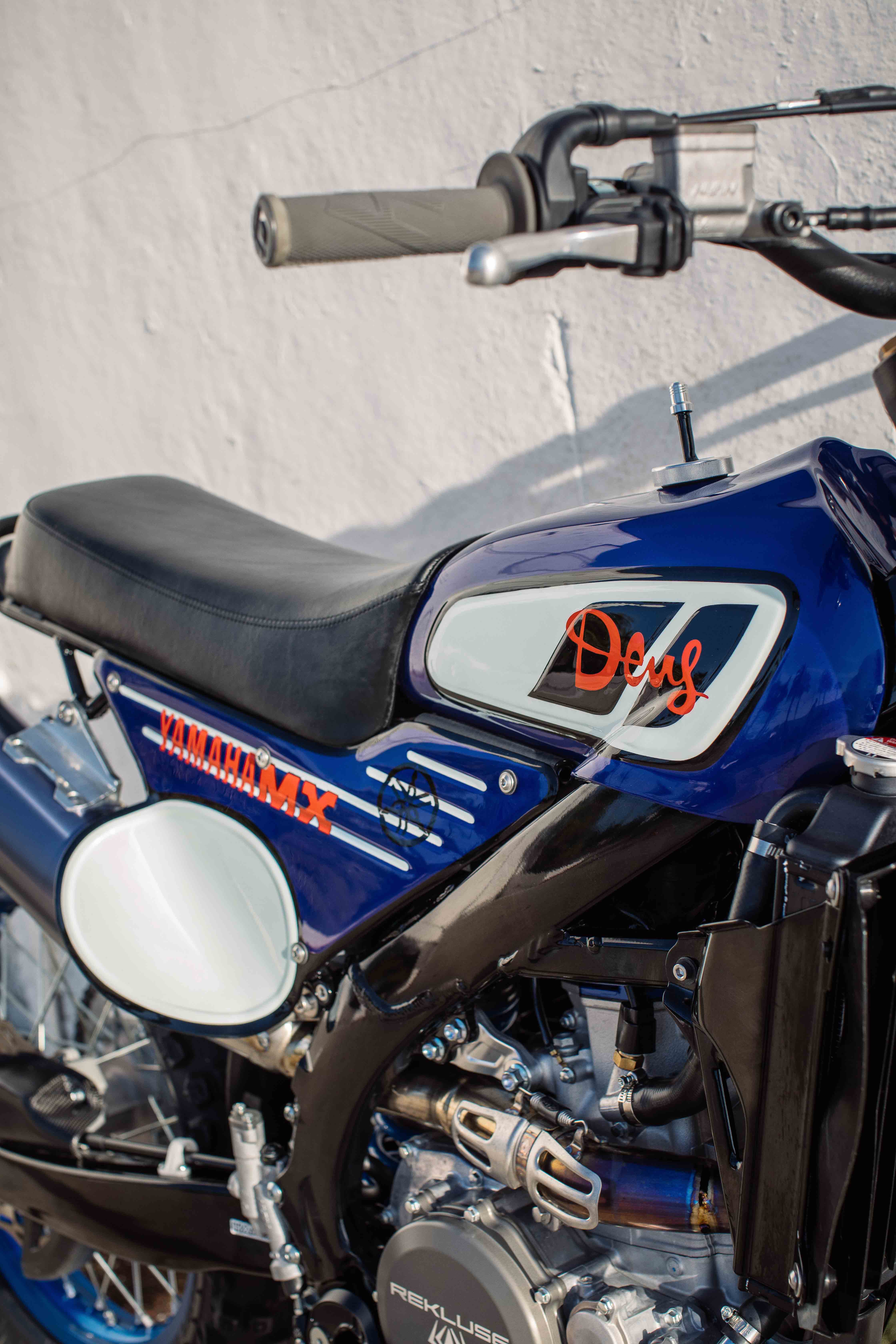 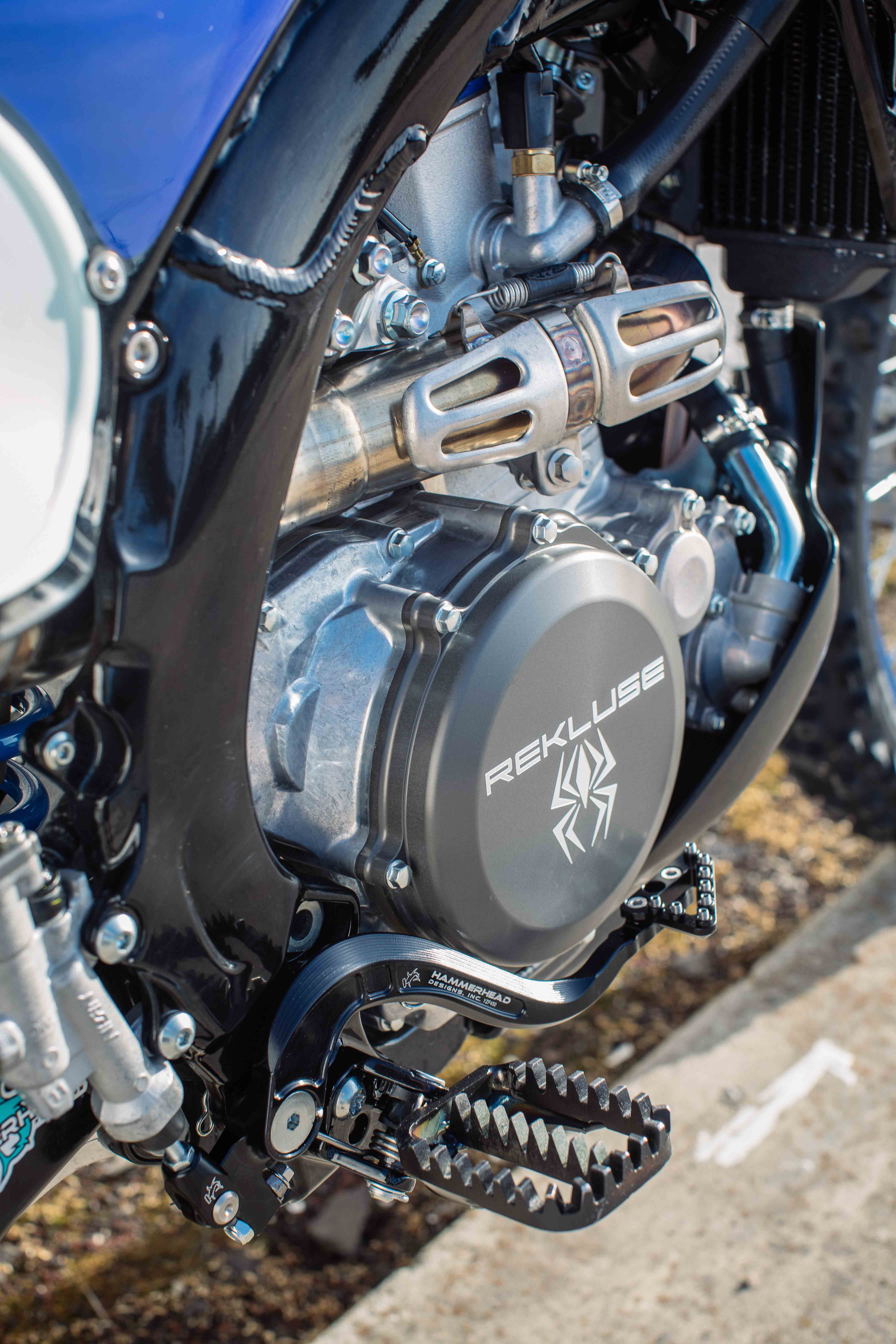 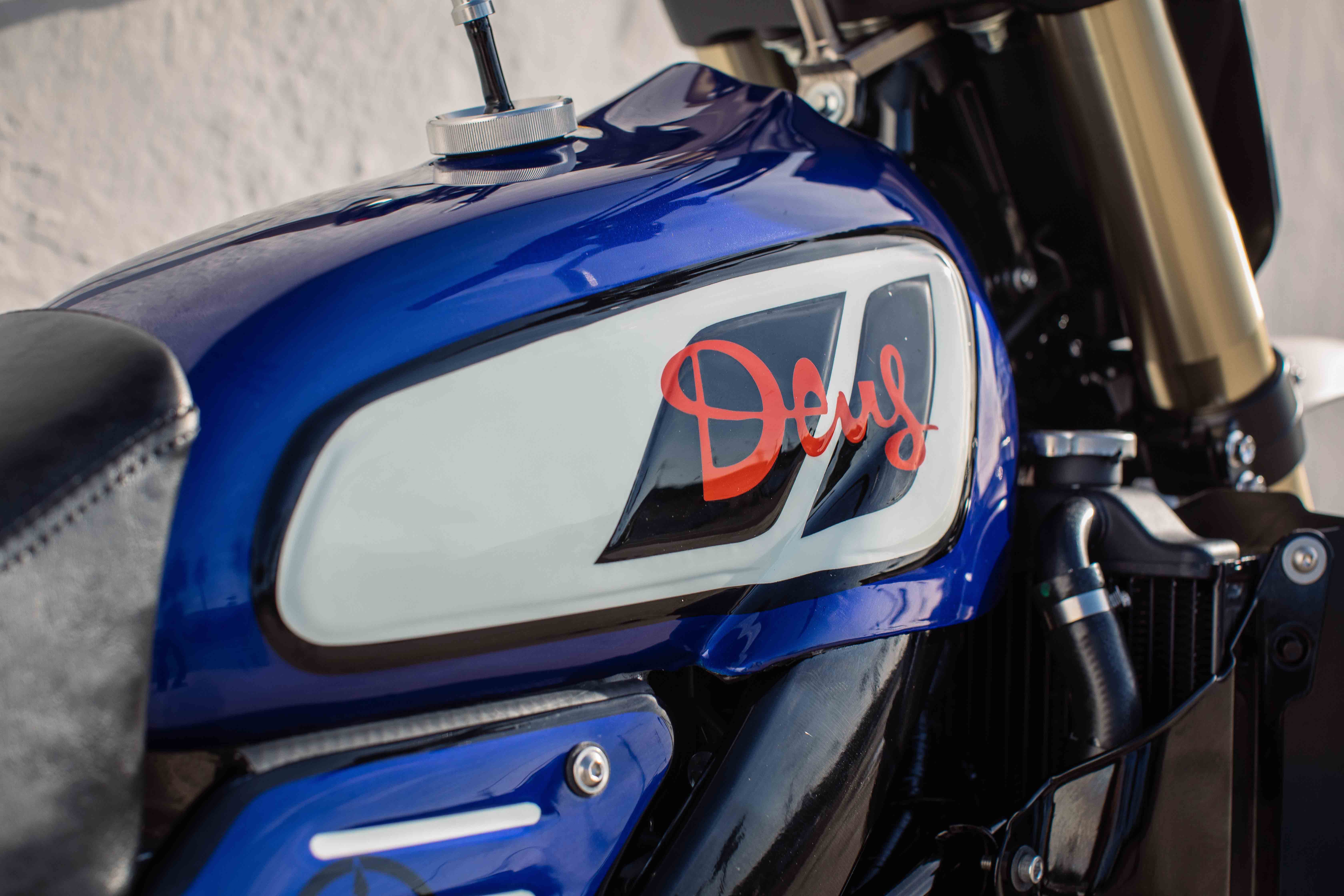 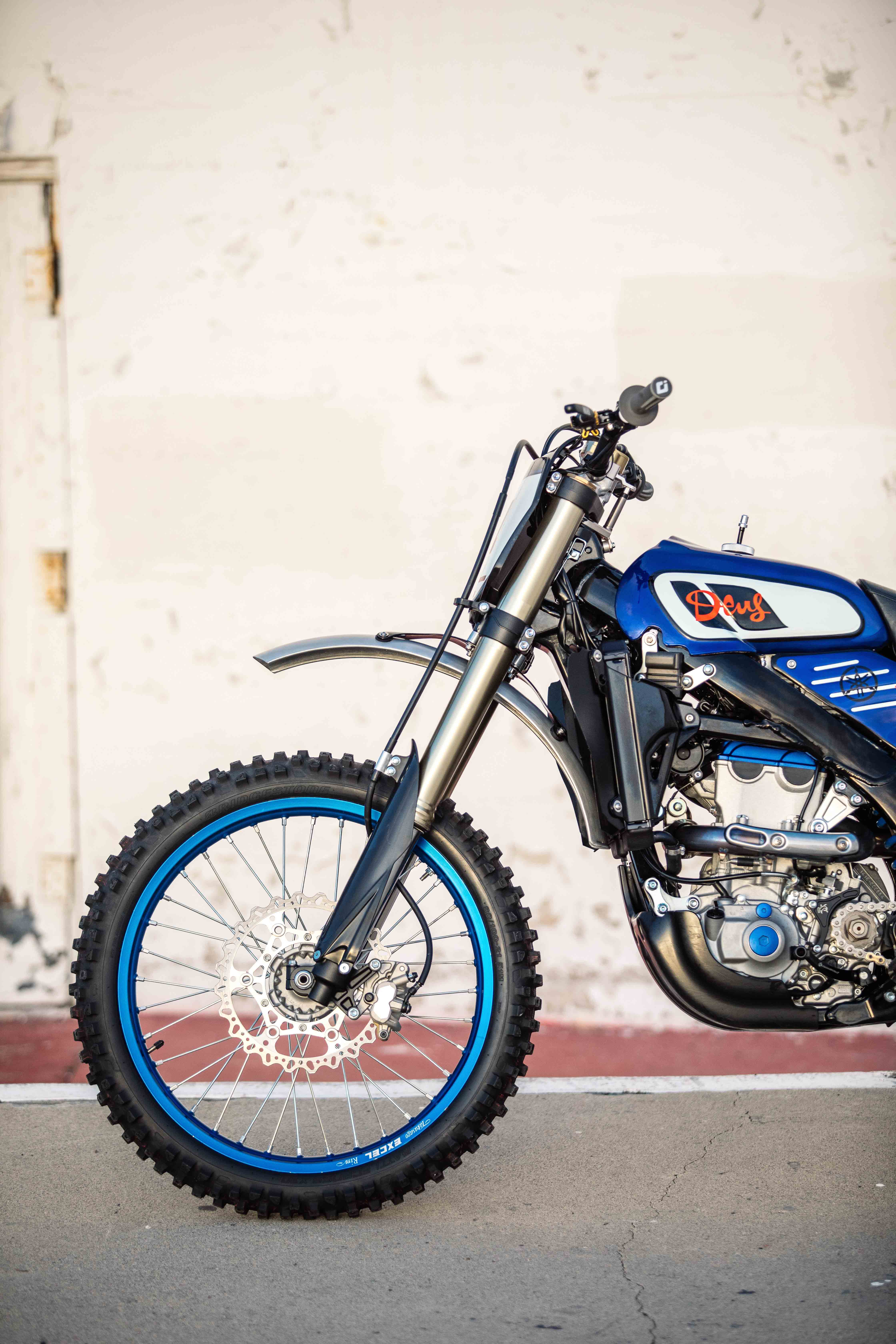 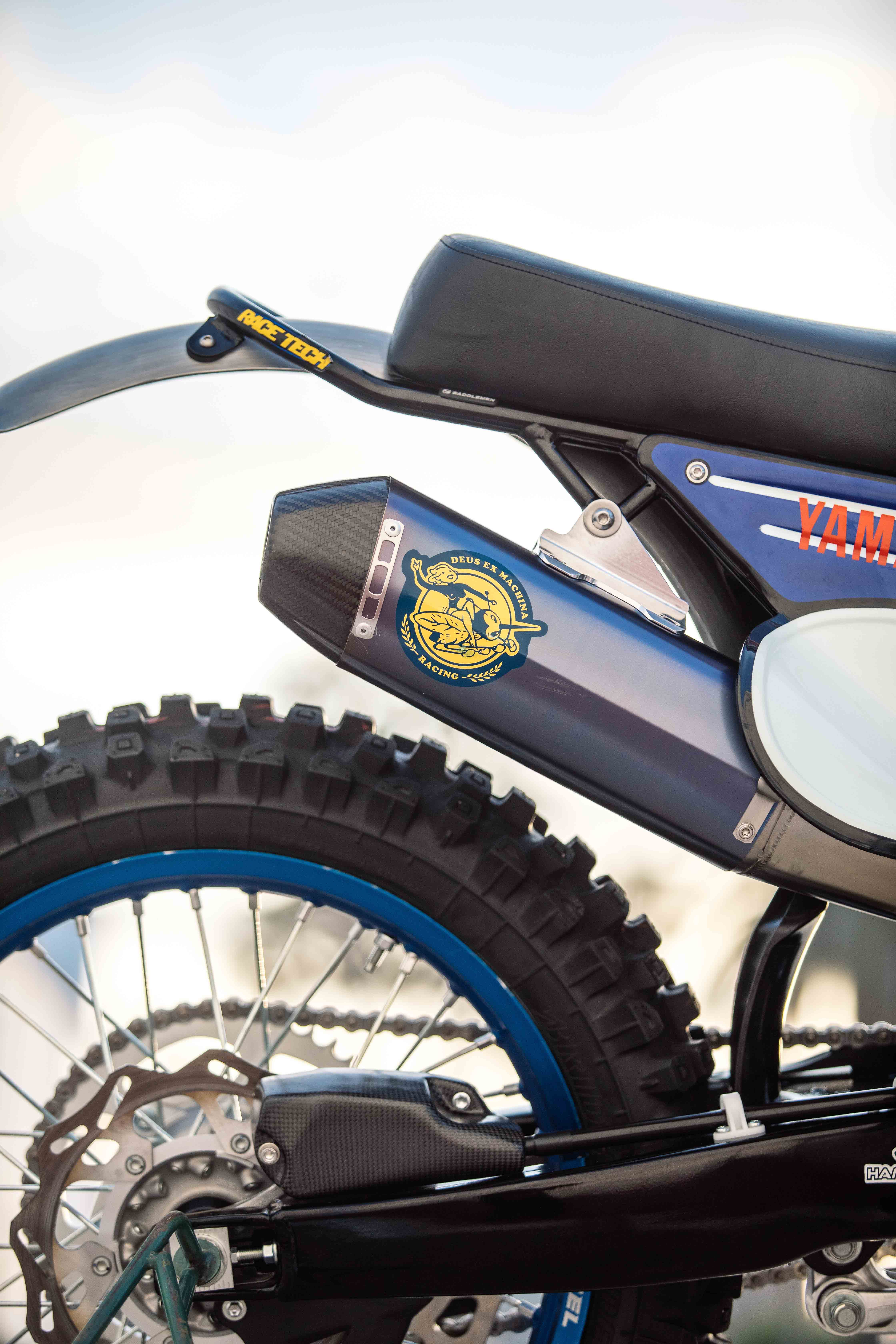 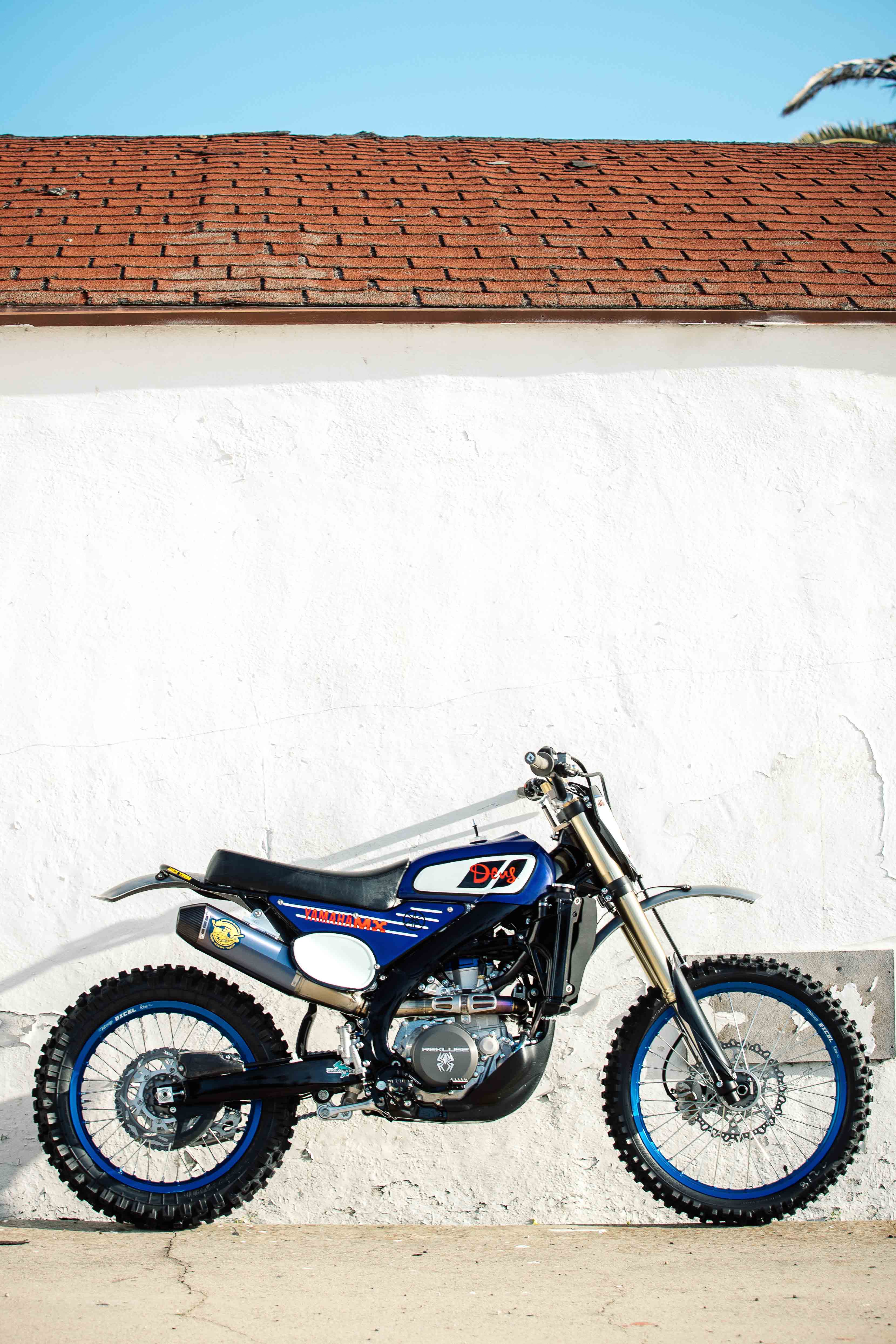 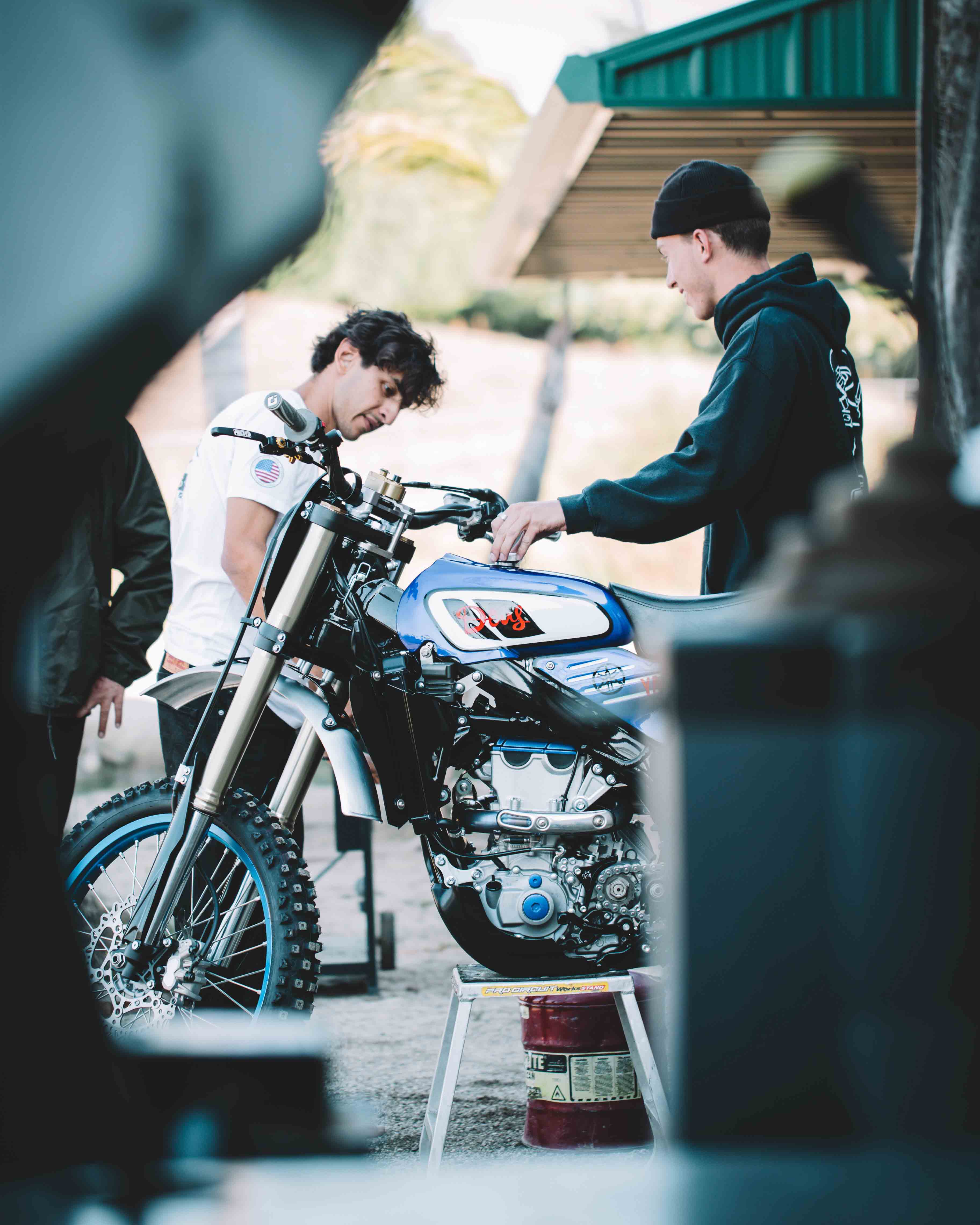 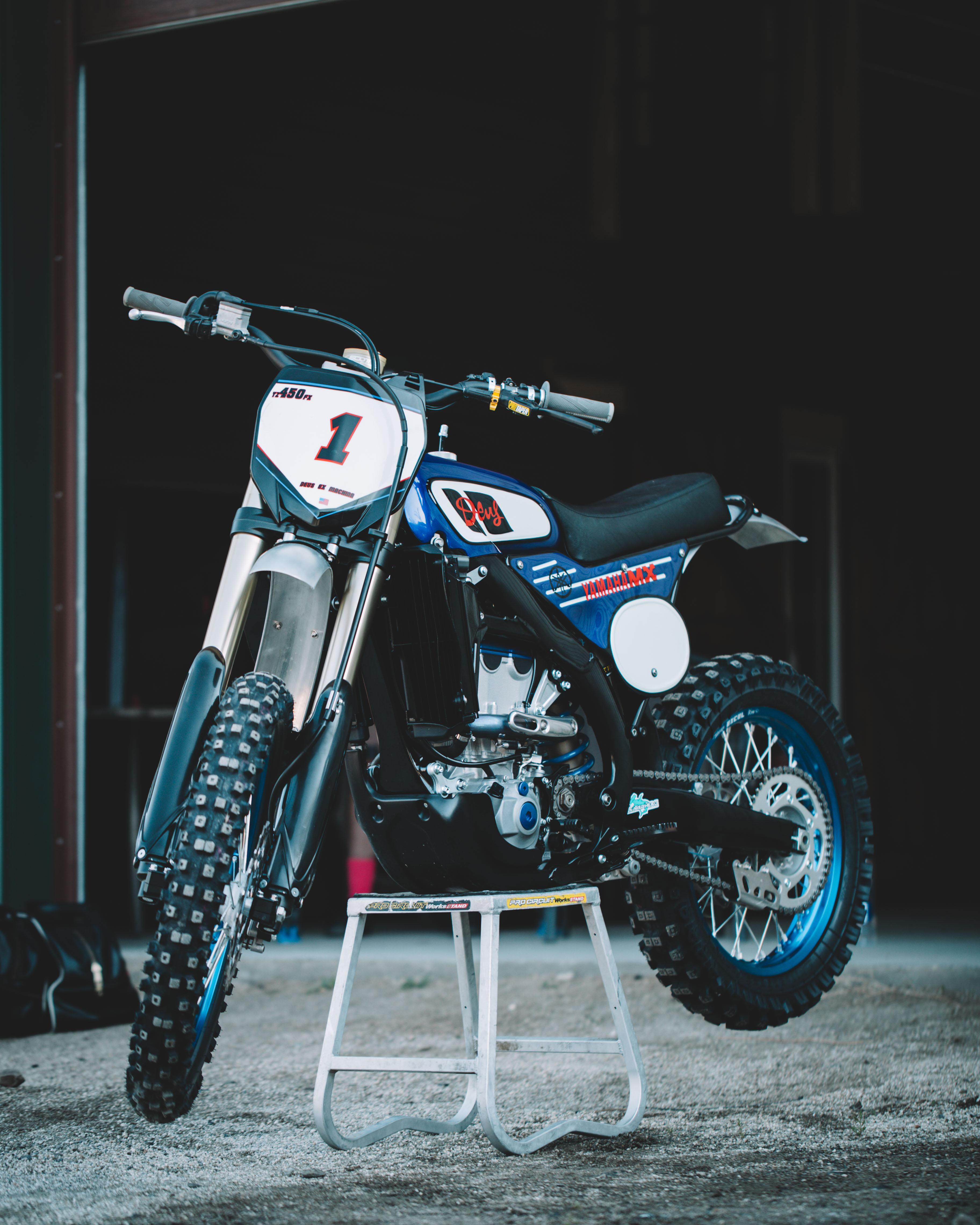 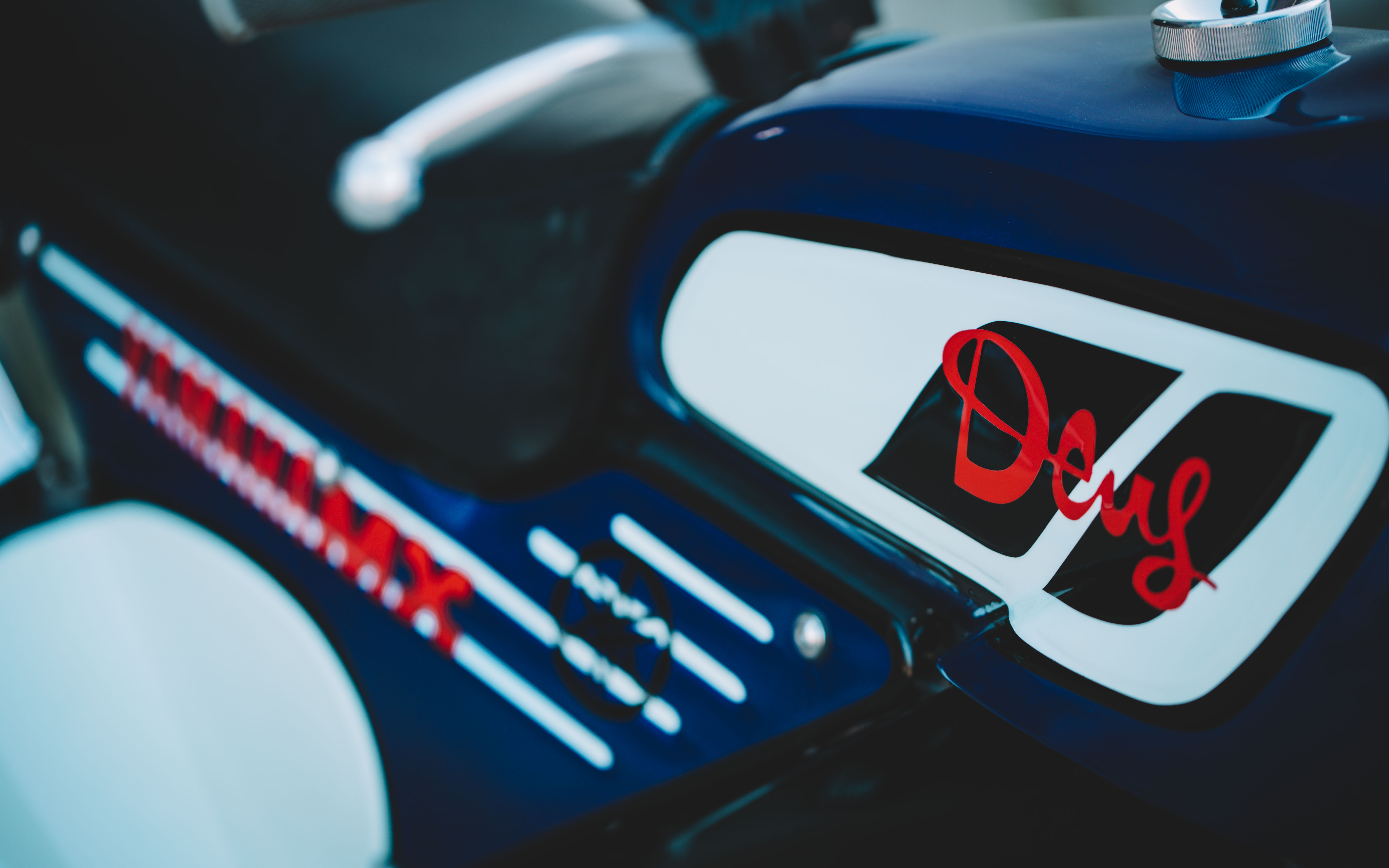 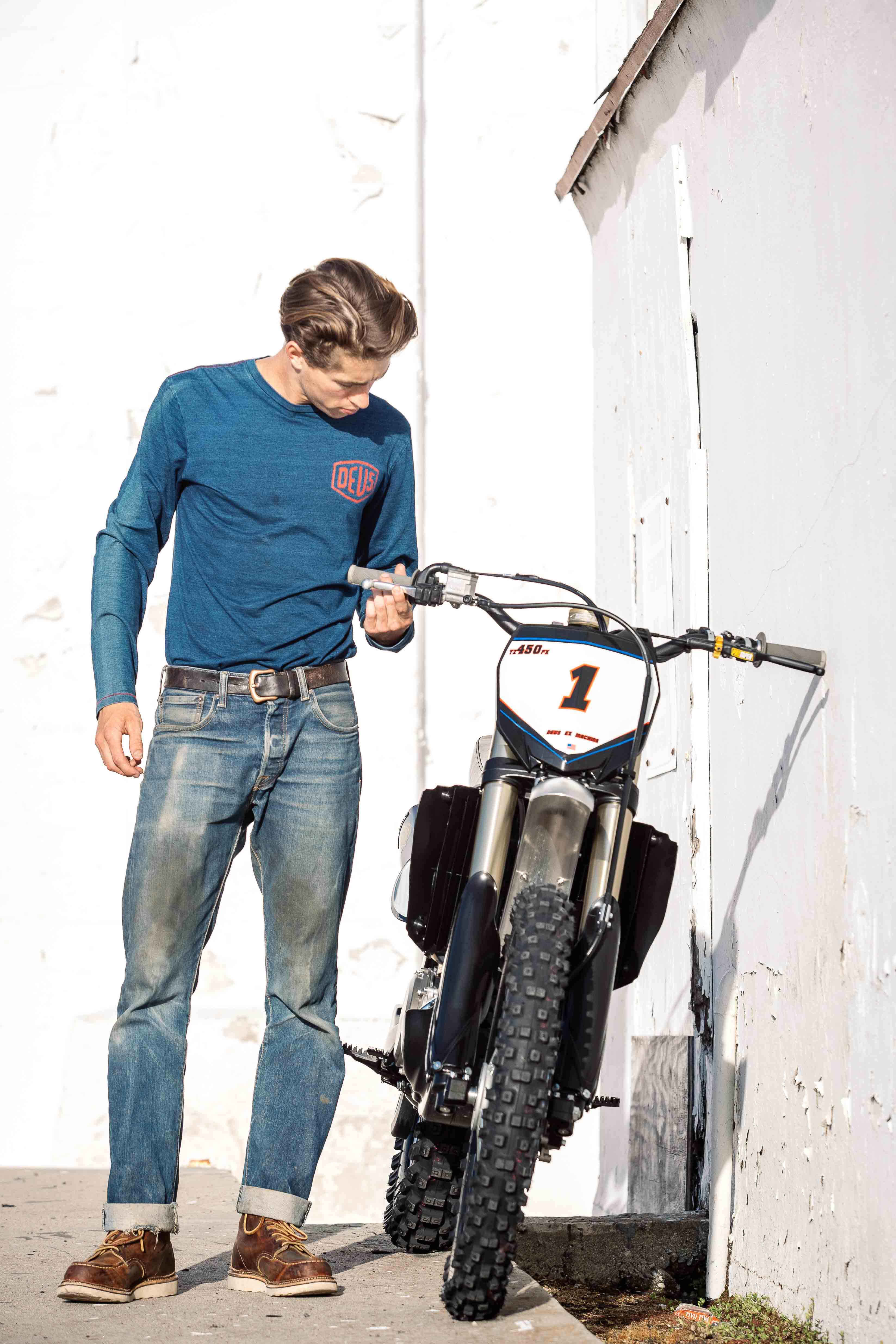 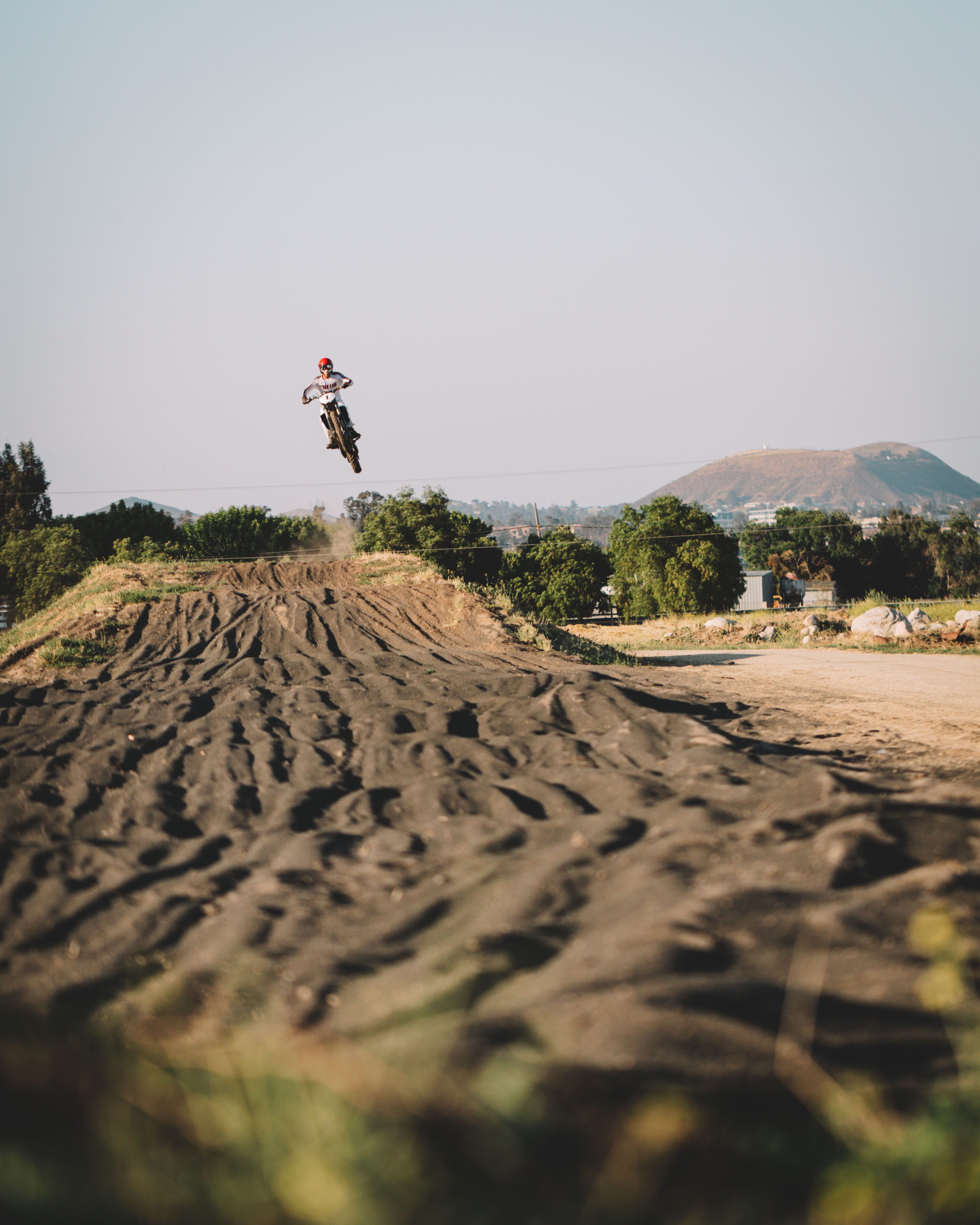 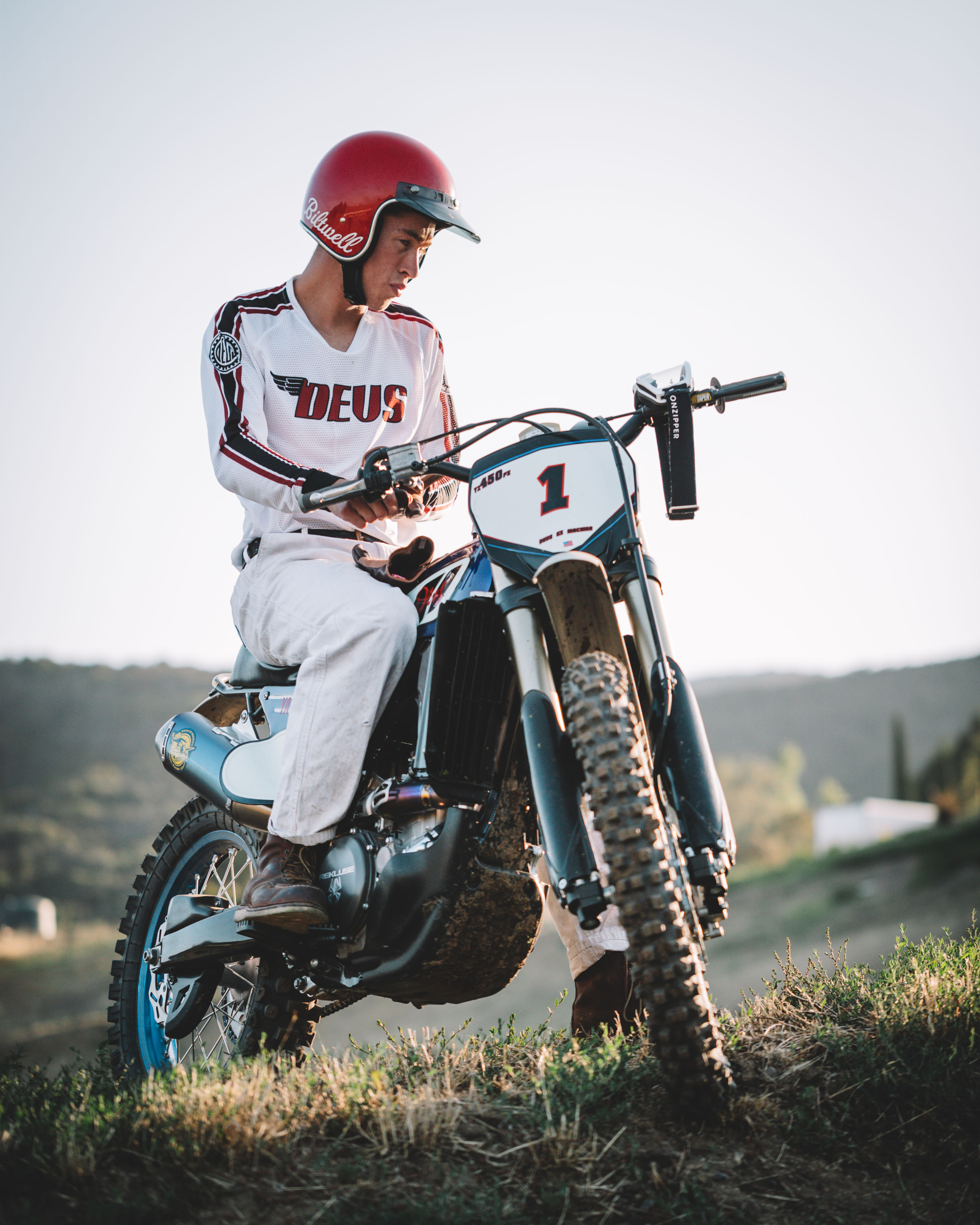 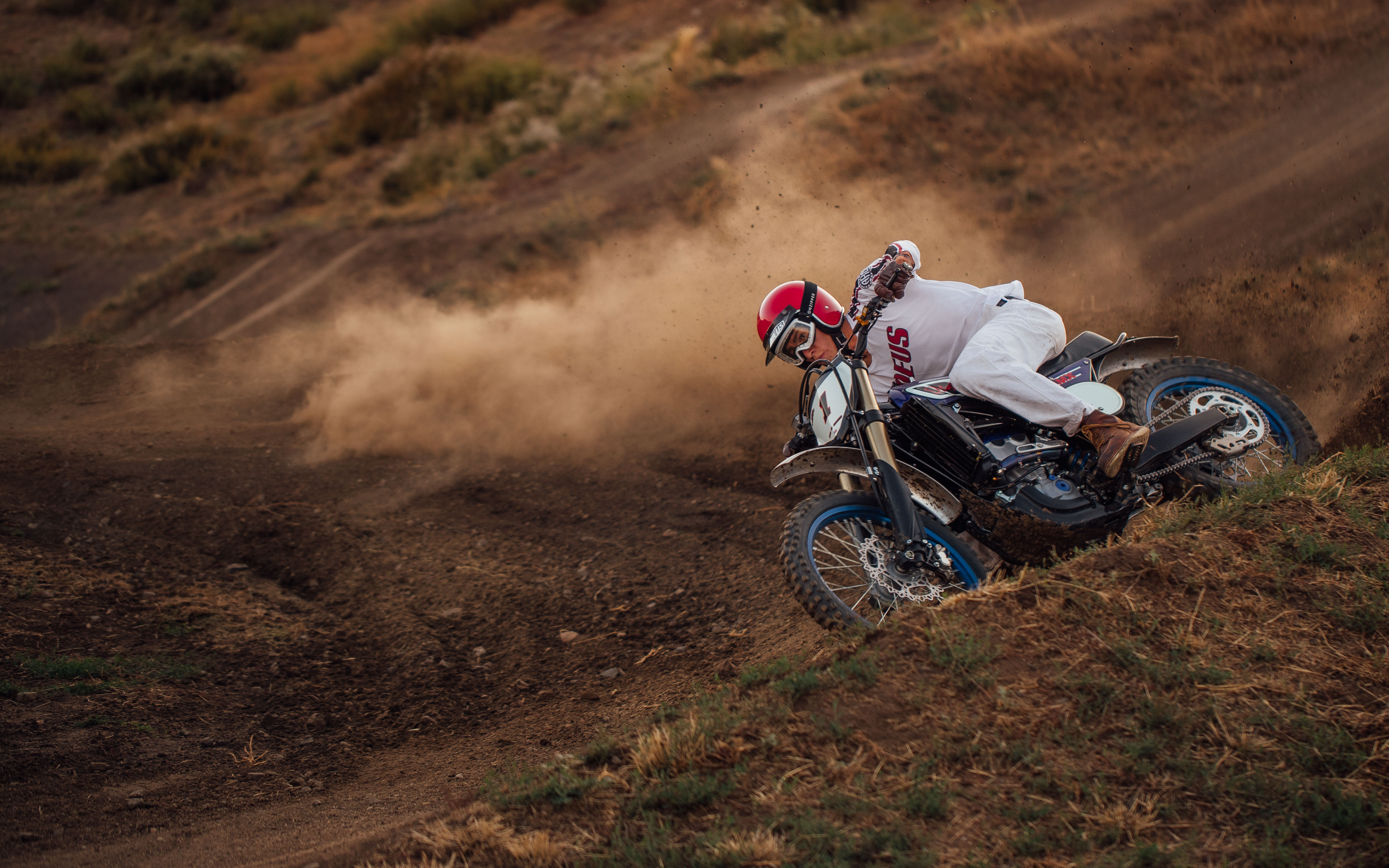 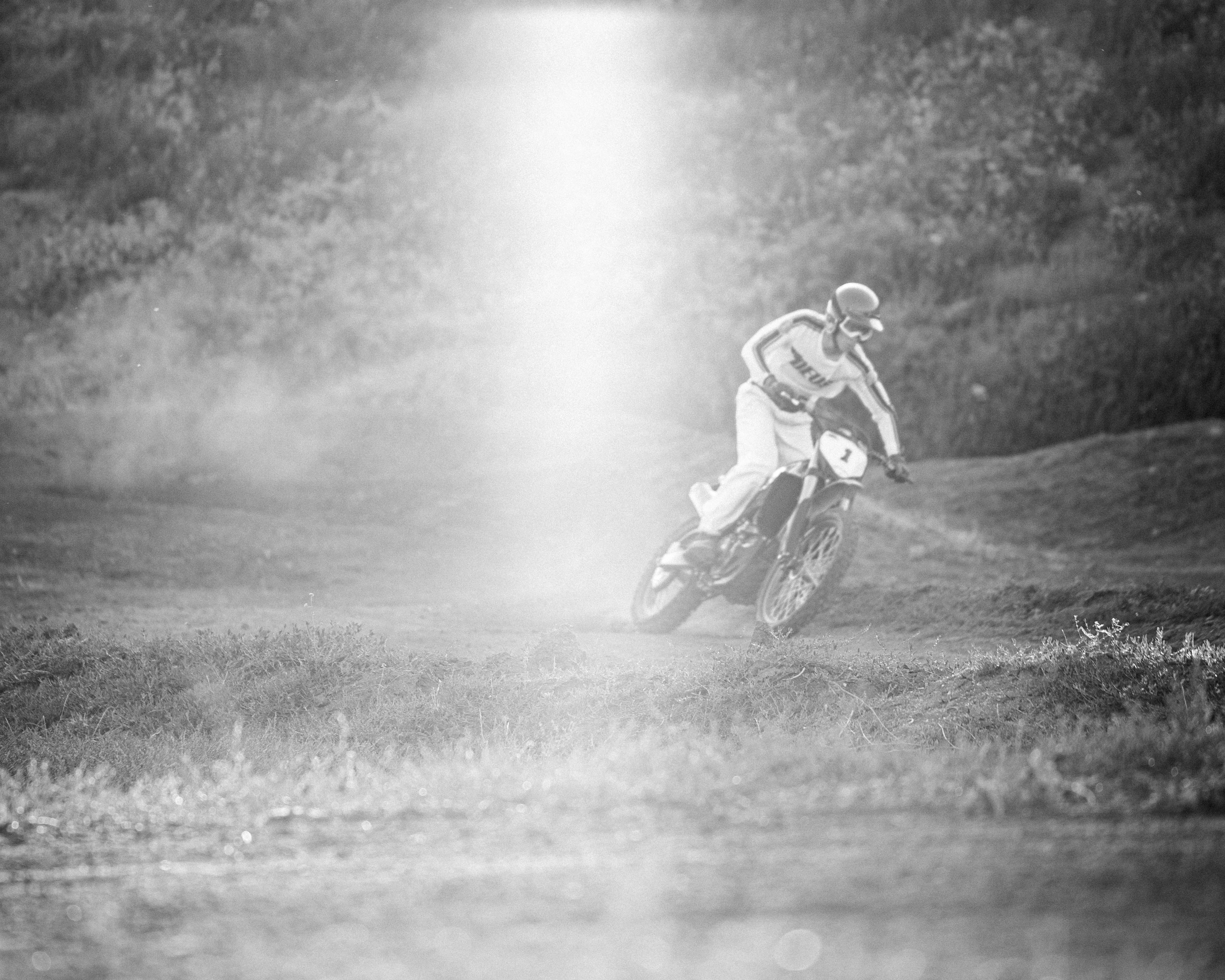 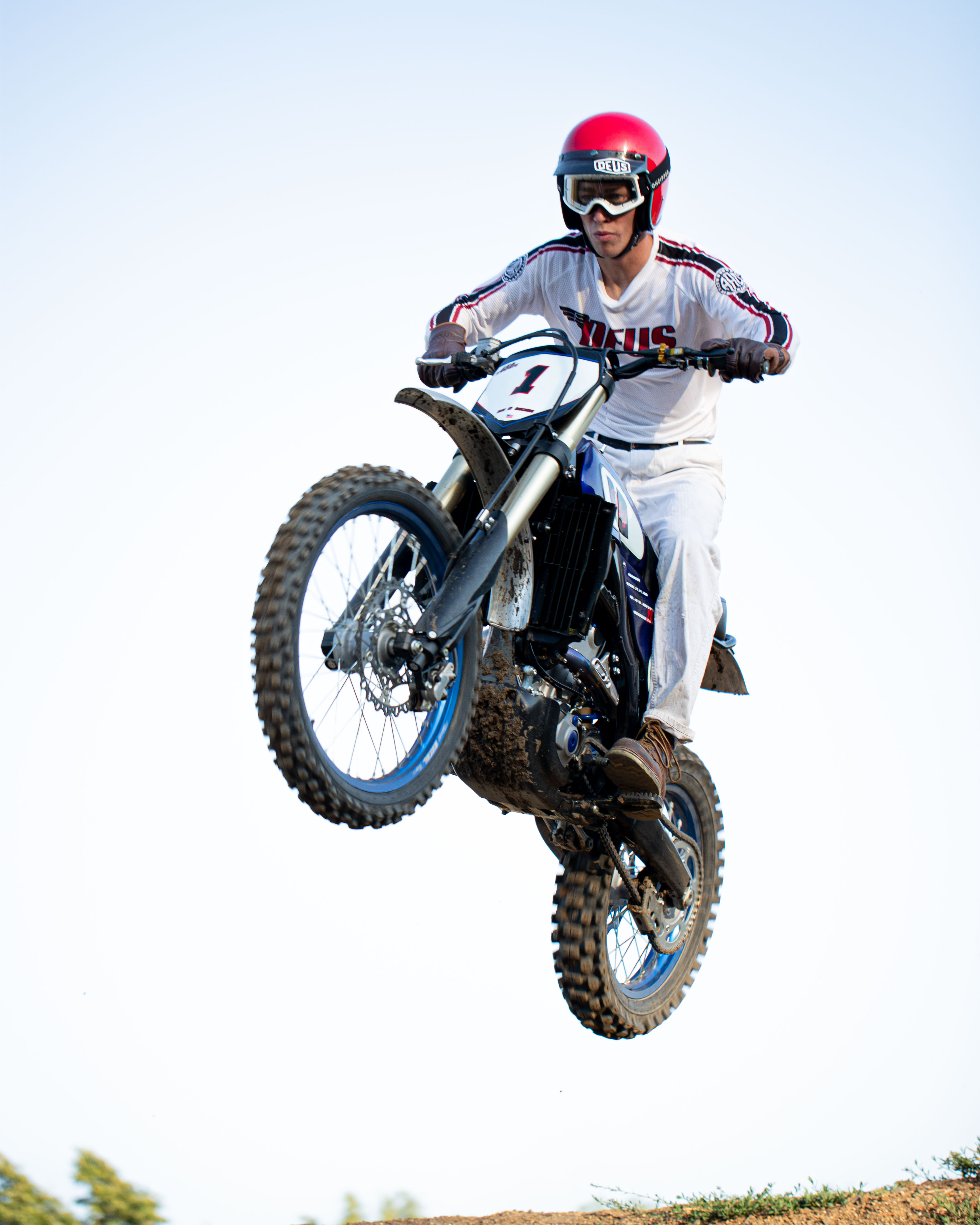 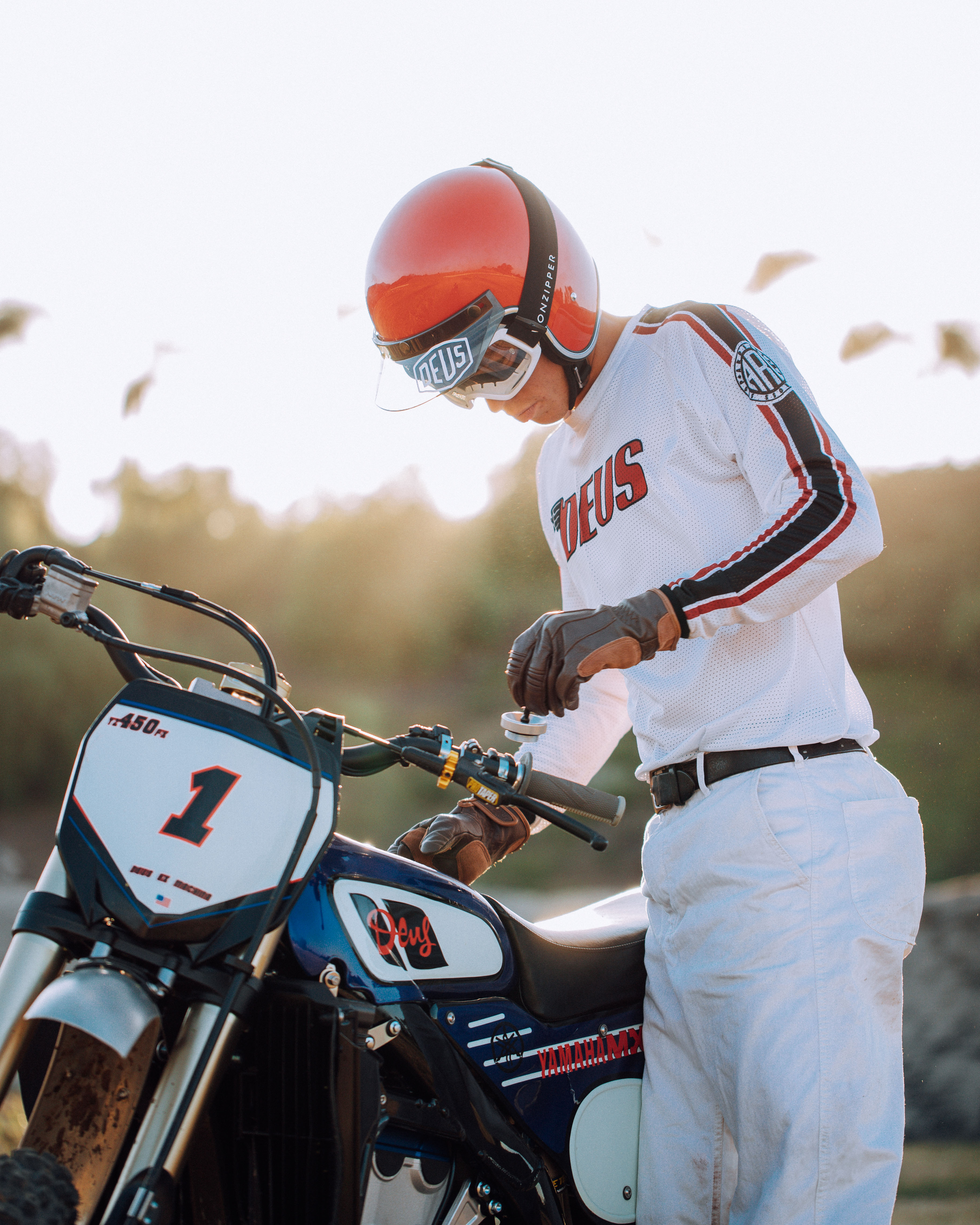 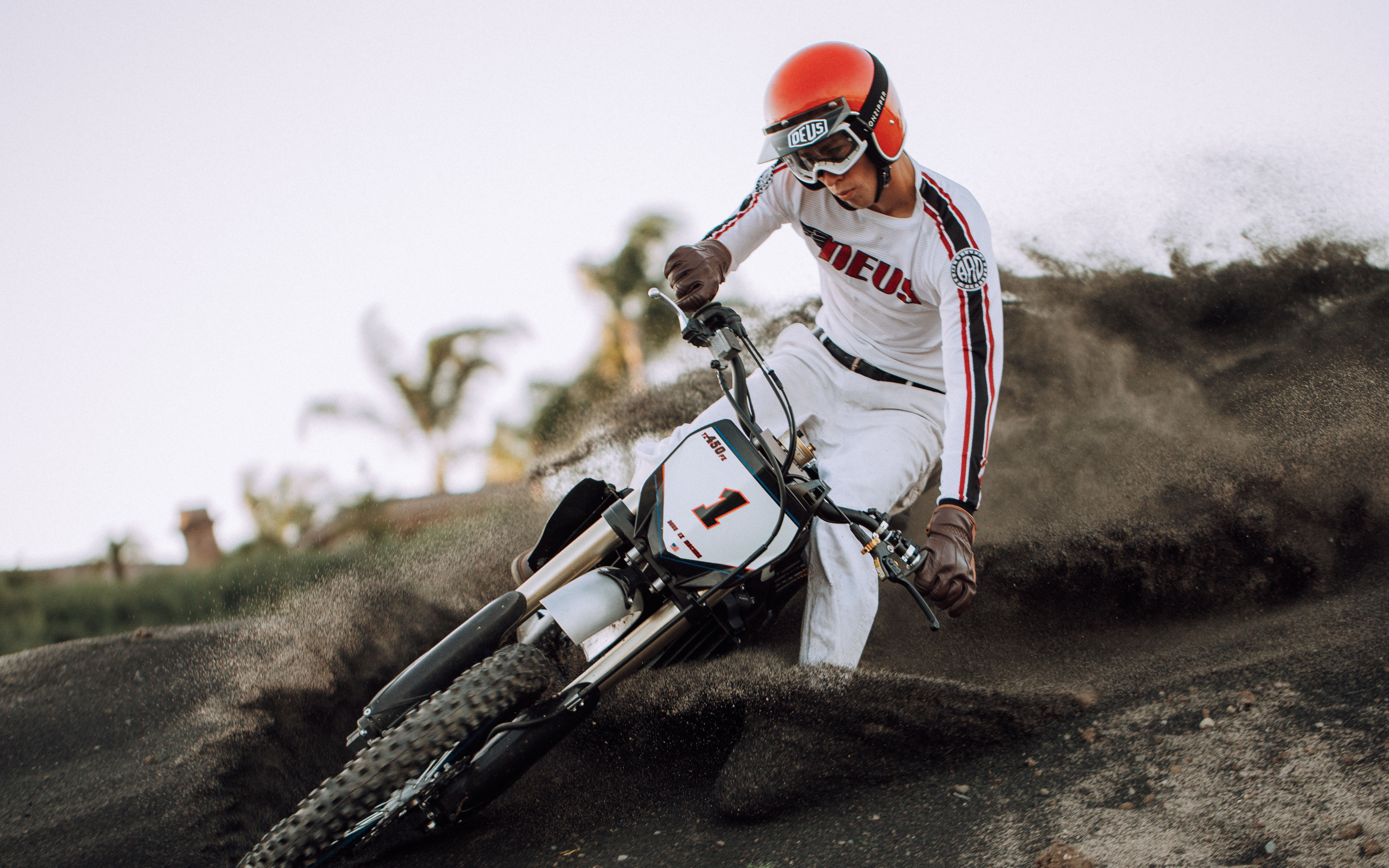